I knew I had a busy evening planned last night, so I decided to get up a little bit early and do yoga in the morning. I must admit . . . I don't think I'm an AM exerciser. I move slowly in the morning, (both my body and brain,) and doing even a gentle yoga practice, (Gaiam's "AM Yoga for Beginners,") felt like too much. So, it's nice to know that I can get up and do yoga right away, but I'm certain it won't become a habit any time soon! 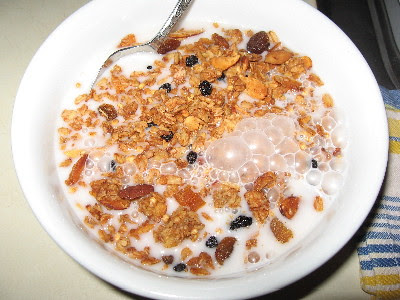 This is the first time I had really sampled the granola I made last weekend, and if I do say so myself, it is fantastic! Nice and cinnamon-mapley. Coffee not pictured. 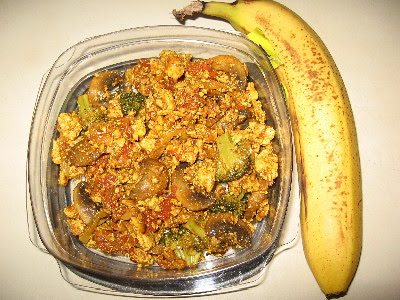 The last of the scrambled tofu, with a banana. I also had a scoop of mashed potatoes that the kids were eating, and a rootbeer-flavored "Dum Dums" pop. 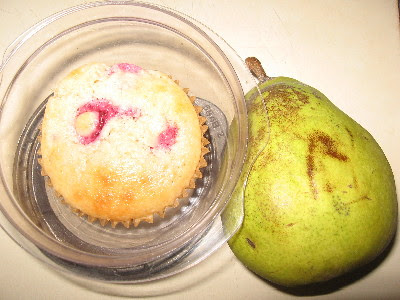 Anyone else feeling burned out on muffins lately? 'Cause I am. :) Another Dum Dums pop, too -- cherry cola flavor this time.

Dinner:
Dan and I went out for burritos to Los Ocampo. (We had planned on going to our favorite Malaysian restaurant, since we had a coupon courtesy of Courtney, but there was a looooong wait! Boo!) Anyhow, I have typically enthusiastically enjoyed their quesadillas in the past, which I've scored when we've been cruising the Midtown Global Market. I decided to order a veggie burrito this time 'round, simply because it came with a huge amount of chips and guac, too! The burrito was good, but nothing to write home about -- nice amount of cheesy rice and beans, crisp fajita veggies, sauteed mushrooms, but slightly lacking in flavor. Salsas and hot sauces, which were served with the burrito, and most of my guacamole portion smeared over the top, really improved the overall taste. Didn't stop me from eating almost the entire burrito, however! (Dan helped me finish a few bites.) Round out the meal with a lime Jarritos, and roasted pumpkin seeds, and call me stuffed!

Treat:
Dan and I went to the Riverview Theater and saw "Rachel Getting Married," (which was incredibly fantastic, by the way!), and I had a small handfull of "Good 'n' Plenty" candies from a bubblegum-style vending machine. Only twenty-five cents, and just enough sweets for me! Yum!

And thus begins our "staycation" -- since we can't afford to go on a "real" vacation, Dan and I have a fun weekend of eats and activities planned! Stay tuned for more fun and tastiness. I have to go to the grocery store, now. :)
around 9:17 AM
categorically speaking: exercise, FLOG, movies, restaurants, yoga

Have fun at the grocery store!!! Love grocery shopping! And great eats!!