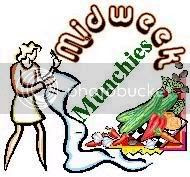 Even though I stocked up and spent a fortune last week, I still managed to need quite a few things this week! I guess that's what happens when you have a small kitchen, and cook and eat a lot. ;-) Last weekend's purchases:

I've decided to try soft tofu in smoothies, instead of soy yogurt. (Less processed, methinks.) I made a huge smoothie discovery last week, too -- I love, love, love a good amount of chai concentrate in my smoothies. Mmmm . . . slightly spicy, slightly sweet, and a bit of caffeine, too. I might brew and chill some vanilla almond black tea this weekend, and see if this works just as well.

My plan for the peppers, onion, mushrooms, tofu, and coconut milk was a Thai peanut stir-fry, but since I ordered that last weekend, those veggies were used up in the creation of a no-cheese veggie pizza, instead. Mmmmm . . . veggies!

Visit Harmonia for more info on Midweek Munchies.
around 6:48 PM

I love seventh generation's motto: "In our every deliberation, we must consider the impact of our decisions on the next seven generations." From The Great Law Of The Iroquois Confederacy

Please let us know how the soft tofu smoothies go.

You're getting close to that free Great Harvest bread, aren't you?

Great list, except for the personal care one- I didn't need to know that!(lol)

I left comments all over the place here, haven't visited many blogs lately, but I try to keep up with yours:)

I've been thinking about those tampons. I think about things going into me (food, etc), but then there are things that go in the *other end* that should be HEALTHY and organic too. Ok, I think you officially inspired me to get some organic cotton tampons. Great list by the way.

Chai smoothie... you got my attention. My sister got me abig bottle of chai tea concentrate stuff awhile back, I haven't opened up. I will now!

I know what you mean about the oil spray. Someone gave me a reusable oil sprayer from Pampered Chef several years ago. I LOVE it -- so much less waste & use whatever kind of oil you wish. A couple days ago I ordered some stuff from a friend who had a Pampered Chef party, and I noticed that they still carry that product, though I don't see it on their website...

Kai, you're funny. I put the tampons on there, just for comments like Leslie's! They work the same, and are better for me and the environment! Everybody wins.

Vicki, I've been really pleased with Seventh Generation products in general. I love how they note on their packages "if every person in America bought one of this, we would save . . ."

I've thought about getting one of those reusable oil sprayers, but I hear they get clogged up. What's your experience?

The sprayer can get clogged if it isn't used in a while, but nothing that a little warm water rinse wouldn't fix. Saves $$$ & landfill space. ps: I use seventh generation tampons & before I found them, OB. Less waste.